While the case was later settled for $25M, Freedom Debt Relief neither admitted nor denied, “... any allegations in the First Amended Complaint, except as specifically stated in this Order” with the order stipulating the rules of the judgment.

In our research, we found 2 Freedom Debt Relief lawsuits.

So, does Freedom debt relief lie to you?

Not necessarily. While I cannot say whether a specific sales representative lied to you, Freedom Debt Relief has to abide by the CFPB’s orders to help protect you. You can also know that many individuals have had a good experience with Freedom Debt relief. The company has an A rating on BBB, and a 4.4 based on over 3000 reviews on Consumer Affairs, but that doesn't mean all of Freedom Debt Relief reviews are glowing. For example, Freedom has a 1.5 rating based on 31 reviews on Yelp, and you can't even find Freedom Debt Relief Google reviews, which I find curious as I find both of those review sites tend to be unbiased. The only thing I found was Freedom Financial Network's Google profile, but no reviews associated with it.

We will go over this in much fuller detail below, but here's an analysis of almost 50 Freedom Debt Relief reviews on Consumer Affairs.

That said, one of the important things with Freedom Debt Relief  (or any debt relief company) is to pay close attention to the Client Services Agreement.

Below is a picture of our client services agreement when we used to practice debt settlement. Just for reference, we now help people compare options such as debt settlement vs Chapter 7 vs Chapter 13 bankruptcy. Ascend's goal now is to help you get out of debt cheaper, easier and faster when facing financial hardship. 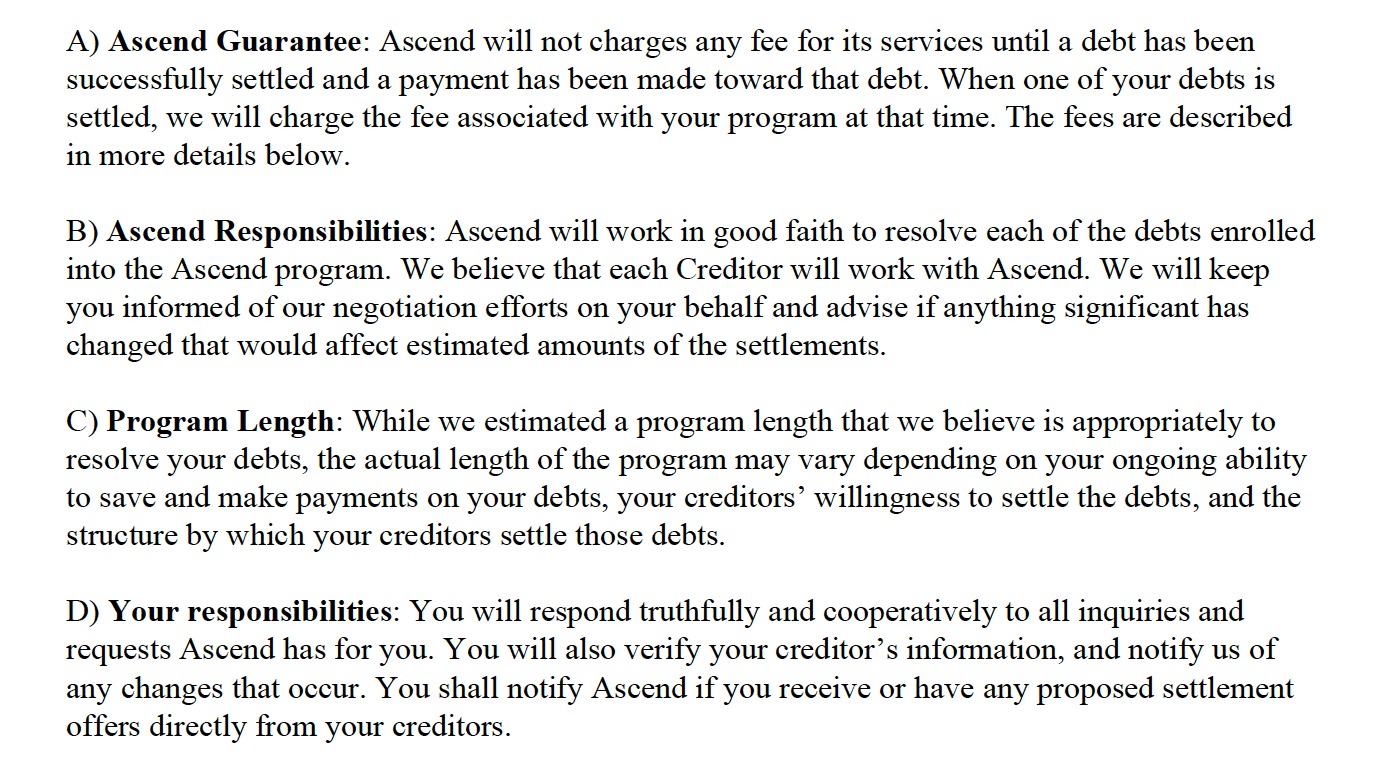 What Are Alternative Options that Can Get me Out of Debt Cheaper and Faster?

The four main options are debt management (credit counseling), debt relief, bankruptcy, and debt payoff planning. We built a specific free resource that is based on years of experience that helps you estimate how much each option costs and how long it takes in the form of the debt options and cost calculator below.

What Should I Be Aware Of When Deciding Upon Freedom Debt Relief?

Freedom Debt Relief may state that you will not pay ANY fees until your first settlement. That said, there can be confusion about how much you will pay after your first settlement.
So, let's talk about savings and fees.
Below is an image of a debt settlement savings analysis I completed for someone. The numbers are slightly altered, but you can see that the person actually lost money with Creditor 3 and Creditor 4 after all of the fees. It's important to understand Freedom Debt Relief's fees because you may acctually lose money on a settlement.

Let's now talk about the fees.

Many debt settlement companies charge a % of enrolled debt ranging from 15-25%. Let’s take a look at an example if Freedom Debt Relief charges you 25% of your enrolled debt.

What I would recommend is to use our tool to compare the cost of debt settlement and other options.

I had a conversation with a bankruptcy attorney recently. In the conversation, he stated that debt relief companies help him get a lot of clients.

Because many debt relief companies do not look at your lawsuit likelihood. I am not sure whether Freedom Debt Relief does this, but it's an important question to ask them. For example, American Express and Discover often sue for unpaid debt, but did you know that before signing up?

Before building debt relief calculators to help people compare options in an unbiased way, we used to be a debt settlement company, so we comprised the data for those creditors who are likely to sue and built a lawsuit likelihood calculator, so you could add your creditors in and have an estimate of whether you would be likely to be sued.

Should I Not Do Debt Settlement If I have an American Express or Discover Card?

You may wonder if you should avoid debt settlement if you have a creditor that is likely to sue you.

If you have only 1 creditor out of 8 that are likely to sue, then the debt settlement company can prioritize settling that debt before others. Also, when a creditor sues, a debt settlement company like Freedom Debt Relief may be able to settle the debt, but just for a higher percentage. So, you may have gotten 50% of the balance owed before, and now have to pay 75% of the balance owed.

That said, if most of your creditors are likely to sue, then you may pay well over 100% of the balance owed after accounting for debt settlement fees, so then an individual may consider looking at Chapter 7 qualification using the means test or Chapter 13 bankruptcy.

3. Program Much Longer Than Expected

Many people are comparing different debt settlement companies based on two primary factors, and Freedom Debt Relief is no different:

As such, you may be comparing one debt settlement company’s offer of $500 for 60 months to another offer of $600 for 48 months.

These estimates are often based on what the debt settlement company can negotiate the debt for. Creditors may change the percentages that they offer for settlements. So, that can increase the amount of what your monthly draft will be to acquire settlement.

Also, if the debt settlement company is not good at accurately predicting lawsuits, that can be another issue.

As such, some people do feel that they should have known about potential increases in monthly drafts. This is definitely something to consider when joining a debt settlement program.

That is ultimately your decision, and you understand your situation best. Here are a few resources that can help you make the most informed decision:

Are there times when consumers feel misled? Look at the reviews and other sources on your own to make the most informed decision for your situation. Our goal at Ascend is to help you get out of debt cheaper, easier and faster.  If there’s any way that we can help you accomplish that, please give us a call at 833-272-3631 or take one of our free debt comparison calculators.