One of the biggest forms of debt relief in the nation is debt settlement. You understand that people question whether Freedom Debt Relief is a scam. People also wonder whether the company lies and whether there are lawsuits against it.

What To Consider When Researching Freedom Debt Relief

As you begin researching debt settlement companies to work with, there are a few different things you want to consider looking for. While looking into Freedom Debt Relief, you will want to specifically consider the following:

Most Positive and Most Negative Freedom Debt Relief Reviews

In order to get a broad and full understanding of the company, you will want to look at the very best and very worst reviews. This will allow you to see a variety of reviews. It can also give you a balanced understanding of how the company treats its clients. When reading the best and worst reviews, keep in mind that, oftentimes, the worst reviews are written at the pinnacle of heated emotion. The best reviews are written at the time of relief (even if that is before anything significant has happened).

How Much Does Freedom Debt Relief Cost?

Freedom Debt Relief charges on average 21.5% of enrolled debt, but what does that mean? How does that compare to other debt relief profiders?

To help our customers make an informed choice, we built a debt relief cost comparison calculator which enables you to evaluate different debt relief options. You input your income and expenses and get costs customized for you.

Another thing to look into is how established the company is. Is their history solidified by time? Or are they relatively new? Some debt relief companies have stellar reviews. However, they have only been around for a couple of years, making their reviews not as reliable. A reliable debt relief company will have years of experience backed by generally positive reviews.

According to Freedom Debt Relief’s BBB page, the company was founded in 2003. Since then, the company has amassed thousands of reviews. The reviews span many different platforms, some of which we will look through below.

The Better Business Bureau is one of the most trusted review sites on the web. There are multiple factors considered by the BBB. There is also a place for client reviews and complaints, which helps make up the rating of each business.

It’s important to note that, while Freedom Debt Relief has been around for 19 years, the company has only been BBB Accredited for one year. Accreditation from the BBB isn’t difficult to receive — you simply pay a certain amount to become accredited. However, most legitimate businesses opt to pay the amount in order to secure accreditation as it is something that marks the company as more reliable. Also, BBB accredited businesses receive grades based on client reviews and testimonies. 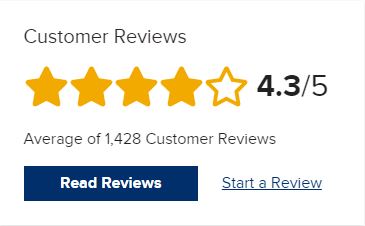 The BBB has given Freedom Debt Relief an A-rating. The client rating is 4.3 out of 5 stars, which is averaged from the 1,428 client reviews. The number of reviews is very important to consider. When companies have a very small number of reviews, this could either speak to their newness, or to a general dissatisfaction with the company’s service. However, when the reviews of the company are still decent after thousands of client reviews, you can trust that the reviews are more reliable.

Google reviews are less monitored than other platforms, meaning that anyone can publish a review without anyone verifying the information. Because of this, Google reviews tend to be much higher than other reviews.

Surprisingly, Freedom Debt Relief does not have any Google reviews to find. There are a couple of reasons this could happen. The first is that Freedom Debt Relief simply hasn’t created a Google My Business page. Setting this up allows for business information to be shown conveniently displayed when someone googles the name of the business. While this may be common for new businesses, an established business should have a Google My Business set up after 19 years.

Either way, a lack of Google Reviews can be worrisome. Before making any decisions, it’s probably smart to look through other platforms for reviews.

A company’s website often puts reviews to help potential clients trust the services being offered. However, because the goal is to sell, it’s in your best interest to take website reviews with a grain of salt.

Freedom Debt Relief’s website displays Trust Pilot’s reviews (which we will cover later). However, they also display client testimonials on a wide variety of topics. It’s important to note here that all of the reviews displayed on their website are perfect, five-star ratings and glowing testimonials. This can be something to keep an eye on, as it suggests that Freedom Debt Relief hand-picked specific reviews to place strategically on their site to encourage first-time visitors.

Also, there doesn’t seem to be an option to leave a review on the website. This means there is a possibility that Freedom Debt Relief fields every review that is sent to them. Regardless of how their reviews are taken in, it is apparent that they are only posting the incredibly positive reviews on their actual website. While not a major issue (why would you post negative reviews on your site if you have the option?), it does mean you will want to take a look at other platforms to see what their more balanced reviews are.

Freedom Debt Relief’s Facebook page has opted to not have a reviews page. This means that people on Facebook cannot leave a review through the platform itself. Instead, they have integrated their Trust Pilot Reviews, which we will look at in the next section.

This could be seen as an issue. Social media is typically the easiest way for dissatisfied customers to leave a negative review. With both Google reviews and Facebook reviews turned off, there isn’t necessarily an easy way for a typical client to leave a review that is simple to access.

In an attempt to see how clients enjoyed working with Freedom Debt Relief — despite the reviews being turned off — I began reading through some comments on their most recent posts. Surprisingly, most of their more recent posts had many different individuals warning others to not enroll in the program.

One woman claimed that she started out with just over $30,000 of debt. However, she ended up with a grand total of $43,000 in debt AFTER she had already paid in about $17,000. Another claimed that, while he was trying to get into a debt consolidation program or even a debt settlement program, he found himself being pushed to apply for a loan instead. While he didn’t end up going through with any of the options, he claimed that the company was not paying attention to what he was asking for and were instead trying to pressure him into another high-interest loan.

Freedom Debt Relief has an astounding number of reviews on Trustpilot. However, it does appear as though they funnel all of their clients or potential clients to the site through both their website and their Facebook page. This could skew the ratings slightly.

Trust Pilot has given Freedom Debt Relief an average rating of 4.5 out of 5 stars. This is the average of almost 36,000 client reviews.

Trustpilot’s positive reviews paint Freedom as a reliable, respectable company. About 91% of the reviews were either “Great” or “Excellent.”

Despite the majority of the reviews being good, the negative reviews were pretty incriminating. Many people complained that they were intentionally misled about what program they were entering into. Another user complained that the way Freedom Debt Relief set up their payment program forced them to take out a loan — a loan that was offered by a branch of Freedom Debt Relief. Other clients spoke of outrageous fees that doubled their debt. Some said they had lawsuits that could have easily been avoided. Others told of miscommunication between departments leading to the suffering of the client.

I think it is also important to note the content of the positive reviews. Despite thousands of positive reviews, it seemed as though the reviews mostly focused on initial contact and customer service. Many of the reviews stated that the individual had questions about the program itself. The individual claimed that whoever they were talking to was incredibly informative and helpful. In fact, on page one of the reviews, there is a woman who gave a stellar, 5-star review but admits she has only just begun the process (see image below).

Consider When the Review Was Written

While this isn’t inherently bad, it does speak to the importance of knowing when a review was written. As you can see in the screenshot above, Trustpilot shows that this reviewer was invited to review Freedom Debt Relief. Knowing that Freedom Debt Relief invites individuals to review their services as soon as the initial point of contact shows that their positive reviews may be overwhelming because their upfront customer service is so good and they ask for fast reviews — especially before they do any debt settlement.

Though this is an incredibly skeptical take on the reviews found on Trustpilot, I don’t think it is an unfair one, especially based on the content of the written reviews. Most speak as though not much has happened yet, but that the individual is excited for the future. Which… of course — they’ve just been told they could have thousands of dollars of debt vanish! Regardless of how you interpret the data, it is important to think critically through the possibilities.

How Do Freedom Debt Relief Employees Review the Company?

Obviously, employees experience a different side of the company. However, it still is important to check and see if they have anything to say about them. Unfortunately, Freedom Debt Relief is a part of Freedom Financial, so we cannot simply view the reviews of the debt relief branch. However, there are still some reviews on the Glassdoor Freedom Financial page that are worth considering.

One employee claimed that the Upper Management at the company had no interest in their employees or the clients they were working for.

Ultimately, Freedom Debt Relief does have decent online customer reviews. However, there are a few issues that may cause some hesitation. The first is that no Google reviews are available for an otherwise well-established company. Secondly, both Freedom’s website and Facebook page only pull reviews from one source (Trustpilot), which has a high number of positive reviews. Thirdly, of the almost 36,000 reviews on Trustpilot, almost every single positive review was from someone who was invited by Freedom Debt Relief to review on the site. From the front page alone, it was easy to see that a lot of the reviews were made either directly after the first point of contact OR sometime soon after.

All of these things are worrisome, despite the massive amount of positive reviews. In the end, however, the decision is up to you. Freedom Debt Relief is a well-established company with over 19 years in the business. If you are still wanting more information on Freedom, give them a call or continue researching for more honest opinions on Freedom Debt Relief’s services. Consider asking around and trying to find a trusted friend or acquaintance who has worked with Freedom before to hear about their experience! Whatever you decide to do, remember that a step towards debt relief is a good step. Hopefully, we can help you make that step with confidence.